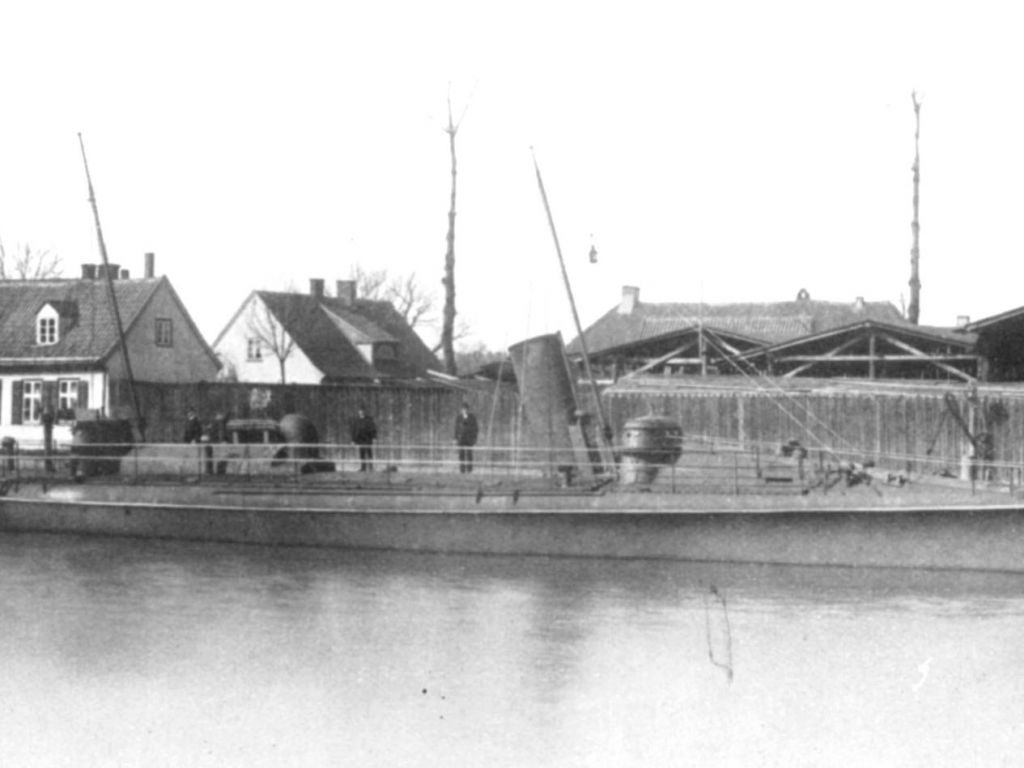 In the second half of the 19th century a new weapon – torpedoe were used in naval battles. Before long torpedo launchers were installed on most warships. Also new, specially designed vessels were introduced – torpedo boats. The idea of attacking ironclad and badly maneuverable battleships by numerous and fast torpedo boats equipped with the new weapon became very popular.

These squat vessels were a difficult target for the slowly firing artillery of that day. Even a small caliber cannon took a full minute to load and aim. Besides, hand  gun and canister fire was not dangerous for torpedo boats so they could come close enough to properly launch their torpedoes. Speed was indeed the most important advantage of these boats. It was achieved by enhancing engine power and improving the hull, mainly by decreasing the width relative to the length. In the first torpedo boats this ratio was 1:8 meters (3.2:26.2 ft), later it was close to 1:10 (3.2:32 ft). This had an impact on their seaworthiness. In practice they could attack only when the weather conditions were good.

In 1883, soon after British and French shipyards started mass-building torpedo boats, Ferdynand Schichaua’s shipyard in Elbląg took a large order for such boats from the German Navy. Before long the Elbląg shipyard became a tycoon in torpedo boats building. One of its ships was a torpedo boat with tactical number S50. Its wreck, known as „ ice skate” lies close to Łeba.

This ship was launched on 4th November 1889 in Elbląg. A year later, on 10th April it entered service with the Navy and was given tactical number S50. It was one of a series of 6 identical torpedo boats with numbers starting from S48 to S57. This line had 409/18 number. The boat was one of several dozen torpedo boats built by Schichaua’s shipyard in the years 1884 – 1892. Simplified construction plans of the boats are presented in Drawing 1.
The first model of this not too big vessel was armed with two Hotchkiss cannons, rev. 37 millimeters (1.4 in) placed on the bow and on the stern. In 1893 they were replaced by one cannon, rev. 50 millimeters ( 1.9 in),whose remains can be seen on the wreck. Besides the cannons S50 had also one bow and two deck torpedo launchers, rev. 350 millimeters (13 in).   During reconstruction of the ship the deck launchers were removed and a second smokestack was built instead.

On 11th November 1910 the boat was quite outdated and transformed into a support minesweeper, number T50. The ship sank on 28th September 1914, at the beginning of World War I. During its 24 years of service the boat didn’t see any action.

Diving the wreck of S50 is one of the most exciting dives in the Baltic sea. Despite its small size and quite serious damage the wreck seems to be bigger, mainly thanks to fishermen’s trawls wrapped around it and floating on the buoys above the wreck. The trawls are not a danger for divers and create a special atmosphere.
The wreck lies on the keel and our journey starts at the remains of the stern. It’s the best preserved part of the boat. Despite progressive damage to the steel hull divers can enjoy a view of the rudder  and of the propeller buried in the bottom. It’s also from here that we can see how the deterioration advances. The wreck’s remains look like a Swiss cheese. The whole wreck is evenly covered by mussels, only in a few places rusty steel can be seen.

Having examined the propeller we move towards the wreck’s bow. A few meters/yards further up we come to a breach where the substantial damage of the wreck starts. From this point the midship is covered by a trawl and care is needed when diving. The trawl though can be easily seen, and since it is made of thick ropes, there is no danger of getting entangled.

The trawl also rests on the stern where stern cannon, rev. 50 millimeters (1.9 in) used to be. The cannon is exposed, the result of storms and currents. It has been knocked over and lies on the starboard. Some wreck equipment is scattered around: capstan, lines and some bits and pieces that are difficult to identify. If we are lucky and

the trawl billows out in the current we could catch sight of what is probably the remains of S50’s galley lying underneath.

We finish our journey by moving towards the wreck’s bow. Just under the trawl – if we look closely – are the remains of the steam engine and the steam boiler of the torpedo boat. Among the tangled pipes a sharp eye will pick out  construction elements that allowed this boat to sail at an enormous speed for those days of 21 knots. The 3 cylinder 1571 hp steam engine

was primarily powered by a coal boiler, the railway style. S50 could load around 30 tons of coal in the coal compartment. Later the boiler was replaced by a much more efficient steam boiler using mazout. The remains of this boiler are the last well preserved part of the wreck. We then move to worst preserved bow part. We can try and make out manholes, covers or bull’s eyes in the section destroyed by water. This is where and when we end our adventure with S50. It’s time to go back home.

Diving the S50 wreck can be done from the Łeba Diving Centre http://nurkowanie.cekol.pl) More information can be found at  Hogarthian Divers website http://www.hogarthian.pl and Balticwrecks http://www.balticwrecks.com

Photo 3. The remains of the bollard

Photo 8. The remains of the wreck’s bow